It’s not The Thames – but it’s pretty

Having sold Chimerique it was natural that our holiday should be a hire boat on the Norfolk Broads. We filled the car with the essentials and set off to a point almost diametrically opposite on the M25 then turned north towards Cambridge and Norwich. We collected the boat at Wroxham.  (Roger didn’t tell me that boating could be like this – large saloon with TV, DVD player, radio, FULL size fridge and, my favourite, French windows opening out to seating on the bow!).  After only an hour we encountered our first obstacle – a regatta at Horning. If you think the yachts on the Thames are trying, on the Broads they are twice as bad. On the Thames some of them are arrogant – on the broads they assume that they have a right to be there and you do not (historically they are probably correct) but tacking and telling you what to do to avoid them can be trying. Looking on the bright side, Barry, we saw no narrow boats on the Broads. 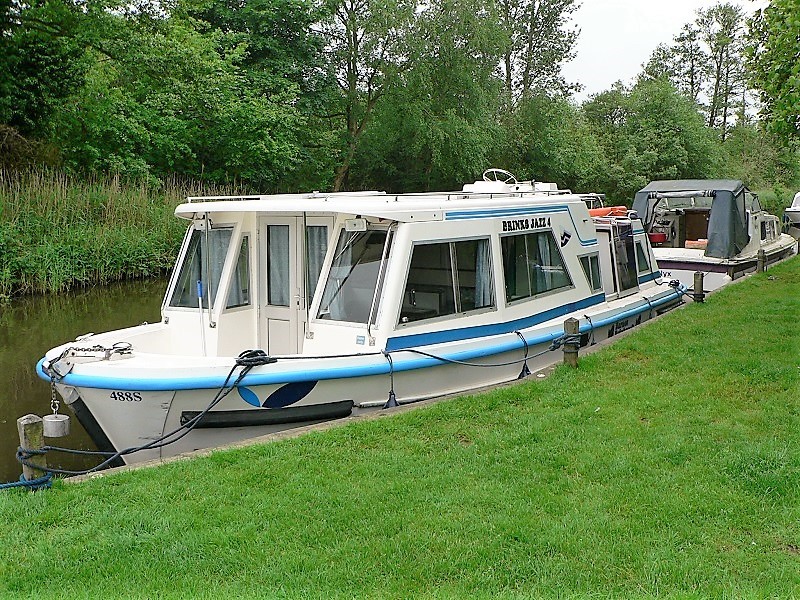 There were no locks and this was a mixed blessing. On the plus side, we did not have to keep stopping or queuing. On the negative side, we missed the chats with lockkeepers and other boaters that is all part of the pleasure of boating on the Thames. We stayed on the River Bure and its tributaries.

Our boat was a 30ft. 4 berth cruiser with an upper and lower helm. 4 berth is a loose term; Bunk beds are fine but when they are 12 inches wide both occupants are terrified that the top bunk occupant is going to turn over and end up in the bottom bunk! The saloon settee converts to a (small) double if you can pull it out but the two halves are at different levels!

The upper helm (only) had a GPS speedo which was very useful as speed limits varied from 3 to 6 mph. 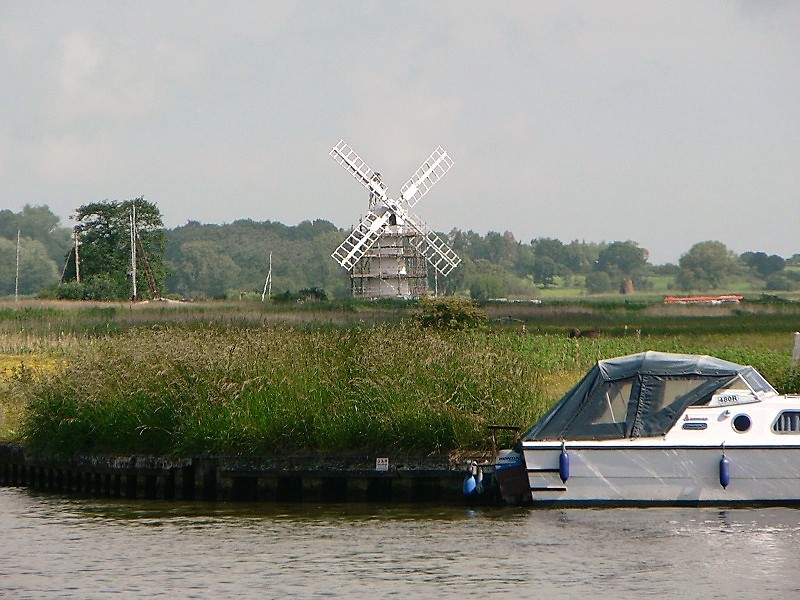 We were very lucky to moor up at How Hill where the manor house had a “secret garden” which was absolutely beautiful. There was also a wherry called Hathor (a Greek god apparently) moored there and we took the opportunity to view inside at the beautiful sycamore doors and paneling. Broads’ wherries have very tall sails (the reeds grow high and the sails catch the wind above). There are only 8 wherries left on the Broads but originally they were the normal form of transport.

Another piece of useless information for you is that the Broads were formed by the cutting of peat since Roman Times. In the 13th Century, abnormal high tides caused the trenches to flood thus forming the Broads. We saw many brick built windmills and these were used to drain the land water.

The area is very flat and the scenery is dramatic but unchanging. You do not get the variety of scenery that we enjoy on the Thames.

We were lucky weather wise. No rain at all, cloudy and around 20 degrees C, but oh, the wind.  Nothing to stop it coming straight off the North Sea.  Now we know why most of the hire boats had inside helms only but the view from down there would not be so good.  We chose a top deck helm from where we could look over the reeds and across the countryside, but with no cockpit or windscreen to protect us it was very chilly for a few days.  Five layers of jackets/coats were a bit of help and I (Denise) wore a pair of socks as gloves when steering.  Very elegant.

Some of the villages are delightful – Horning, Acle and Stalham were particularly impressive. We ate out most evenings and pubs always provided good food, good quantities and reasonable prices.  Horning was my (Denise) favourite place because it has an esplanade, a jolly atmosphere and the village was extremely beautiful.

On balance, we enjoyed our week’s holiday – but a week was long enough.