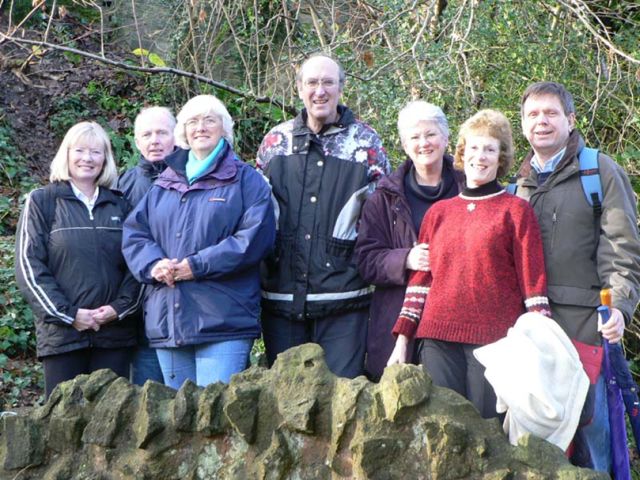 The plan was for us all to meet at 10am on the Sunday morning at the top of The Mount, a high, prominent feature to the West of Guildford.  It is always a brave decision to arrange a walk in December but then we are boaters, we are used to wet weather, we are a hardy bunch aren’t we and so that shouldn’t put us off, should it? Well come the day at 8am it was coming down in the proverbial stair rods, however being the eternal optimist I assumed it would get better later in the morning, probably by the time we get to the start point I told myself!  As it turned out that is what happened, more or less, and so the five starters Roger & Denise, Julia (with Jim at the start to wave her off as he was recovering from op on knees) Linda and myself.

The first stage was a steep walk down into Guildford town to meet up with other club members outside the main door of Debenhams.  We decided to visit this nice warm store in order to inspect the facilities.  Then on leaving we met Debbie, Detlef and Phil, by arrangement, as not everyone likes to be in at the start.  After the customary photograph we set off along the West bank of the River Wey past the bronze statues of Alice, her sister and the White Rabbit.  One thing I have always noticed about walks is that you never fail to learn something; you may not want to learn something but nevertheless you learn something.  In this case it was learning that these statues were put there to celebrate Guildford’s connection with Lewis Carroll.

By this time the weather was good, the sun was up and it was a near perfect day, except that is for the rowers on the River Wey with their coaches cycling along the towpath, shouting at the top of their voices, then of course this was not the first time we had been exposed to this sort of noise pollution.

It was not long before we reached the point where we were getting close to the main event – a pub lunch at the Olde Ship Inn which was booked for 12 members. The Olde Ship Inn was a fitting venue for the WBCC but there was a problem.  Owing to the popularity of the walk it was over subscribed.  No problem, six members could march a further mile along the riverbank to another pub, the Parrot Inn at Shalford.  Off went the six selfless members, amidst ever increasing mud along the river footpath, to find the Parrot Inn.

This establishment turned out to be very different from the Olde Ship Inn as it was bright and modern.

I later received reports that the meal in the Olde Ship Inn was ‘good’ however I think it important to let you know that the meal at the Parrot, including the ambience, company, roast, dessert, beer & wine was excellent.  Furthermore all six were very grateful to David Seager for collecting them in his nice shiny 4-wheel drive thus saving them from the return mud trail, which by then Debbie was unable to see the charm of.

After a good meal and a few drinks, although the weather was still good, it became clear that the enthusiasm shown by club members for further walking in this lovely area had severely diminished, thus leaving just four intrepid walkers to complete the return walk to the Mount where the cars were.  This last leg however was not without incident as whilst enjoying the marvellous sights over Guildford town it began to rain thus finishing the day as it began.  The whole event was nevertheless most enjoyable and it was fun to be outdoors with club members – our thanks to Roger and Denise who put in time to plan and book the event.  This is now a new annual club event – any ideas for the next one, outside the boating season?