Friday of the Late May Bank Holiday weekend saw the crews of Jeverek, Tahoe, Pieces of Eight and Blue Dream rafting up in twos at a very busy Teddington.  We all went off for a meal in the evening with Jenny in a local hostelry to celebrate Viv’s birthday.

An 8am start on Saturday meant we got ahead of the queue, sailed safely down through London, arriving in South Dock at lunchtime.  The only incident of note was an overheating engine on Tahoe which David was able to sort out on arrival in the marina.  A piece of plastic bag had somehow managed to pass through the filter system.  Six of our intrepid adventurers went off to the Moby Dick Inn for supper, to find themselves surrounded by football fans watching Manchester United playing Barcelona in the Champions League Final – not a quiet evening, we suspect. 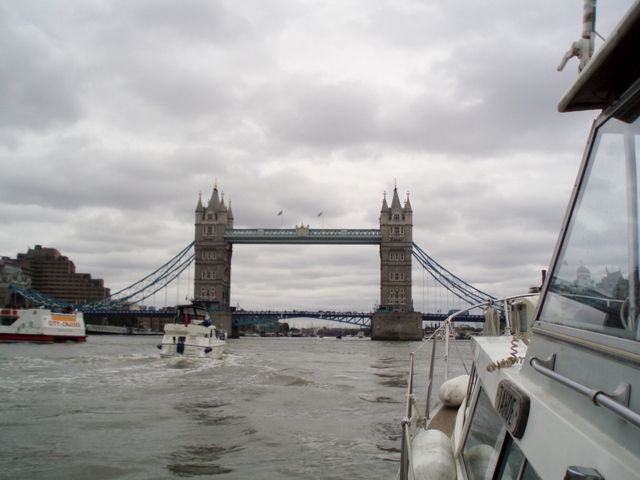 Sunday morning the sun finally shone.  Unfortunately Alan and Nigel had to get home so the boys went to see them off at the lock then Commodore Julia and Jim caught the no.47 bus and went off to visit the “London Bridge Experience.”

Making the best of the sunshine the rest of the party – i.e. Bob & Viv and Dave & June enjoyed morning coffee and biscuits and eventually went off to get some lunch.  Rendezvousing at the Clipper landing stage at 2pm we embarked on an adventure of our own.  Landing on the other side of the river at Canary Wharf, having still not worked out what type of ticket we wanted, we eventually invested £12.60 each in  “roamer” tickets for the Clipper service which took us right through to the end of the day.

First stop, the Museum of London Docklands.  Bit of a windy walk through all those tall buildings, but the museum itself was really interesting – going back to the earliest settlements on the river banks in London.  Finally arriving back at the cafe in the entrance hall, the group spent a happy hour (or so!) enjoying tea and cakes (in delicate porcelain) in very comfortable wing-back chairs.

Still feeling a bit fragile the group set off for the Clipper and after a scary experience when Dave’s GPS took us down a non-pedestrian underpass, eventually embarked on the downriver Clipper which goes down to Woolwich, turns around and heads back upriver.  Lovely.  No walking!  We moved to the front and had a wonderful view of the river and its banks.  At Greenwich a largish party of tourists embarked along with their own guide.  He proceeded to plug in his microphone and we enjoyed an excellent free guided tour of the sights of London from the river. 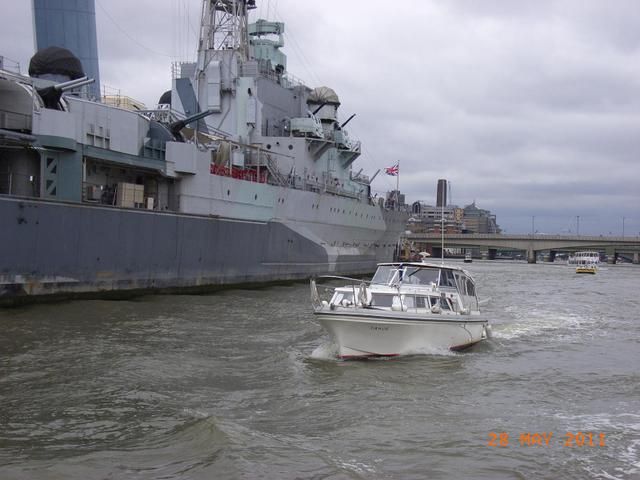 Arriving at Westminster the boat turned around once again and we finally disembarked at Canary Wharf for dinner at Zizzi’s, well after seven o’clock.  The meal was delicious but the entertainment was even better.  Firstly a tall thin girl in a full length stripy, tight-fitting dress from neck to ankle came in with a second girl wearing a short bright apricot dress covered in flounces which Dave described as a lampshade.  A little while later we were treated to the view of a series of young women with huge buzz-ooms and matching rear ends, wearing the most incredibly tight, brief skirts and six inch stilettos, some with two or three inch platforms with stripes on.  Each one was more incredible than the last.  We thought  we had seen everything until a young man came in wearing a white shirt (thankfully tucked into his trousers) with a belt which fastened in the usual place at the front but then made its way firmly down underneath his backside. We were still laughing when we got back to the landing stage.  Our twenty minute wait went quickly and was much enlivened by a lovely chat with a Danish lady and her boyfriend after Dave had taken a photograph for them.  We finally rolled back to the boat at 11pm – incredibly late for a boat trip.

Monday we left South Dock about 10.45am in the sunshine.  Smooth journey back to Teddington with Jim and Julia continuing on home.  Shortly after lunch we were joined by Debbie & Detlef for afternoon tea on Jeverek, with Viv’s delicious home-made cakes.  Yum! – and yet more laughter.  Jeverek & Tahoe finally headed for home on Tuesday morning after a really entertaining holiday weekend cruise.