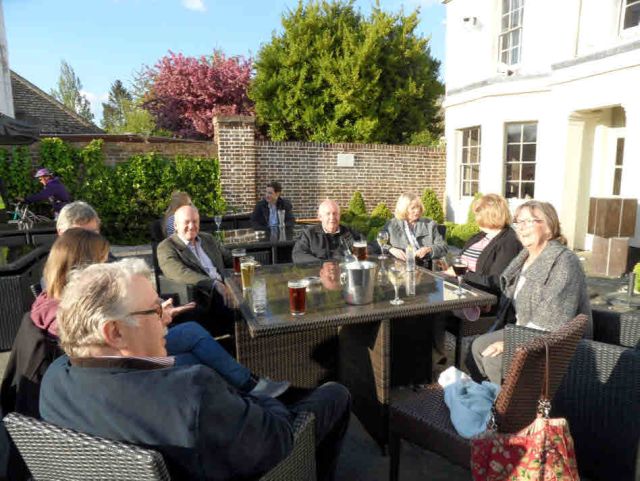 Five boats went to Weybridge over Easter, the moorings which looked newly refurbished are on the left hand side as you turn right into the weir stream after Shepperton lock and apart from being very dusty with the dried mud left over from the floods, it was a good spot.

Our journey had been quite relaxed with a lot of boats going up stream and very few down, for once we were going the right Wey… We arrived last and joined Rosette, Pieces of Eight, Chimerique and Malbec, who also had their granddaughter on board on Friday, and went for a walk into town.  As it was quite late and a bank holiday many shops were already closing or closed but it was good to stretch our legs after a long run on the boat from Bray.

Dinner was to be at the Old Crown pub, and the food was really nice – they even managed to cope with all our requests for jugs not straight glasses and bottles of wines to be split onto individual bills and we were sat in a very nice conservatory.  Roger left us before dinner as he was not too well and headed back to the boat.

We walked back and Malbec offered to be host for late night drinks and chat and we all finally went back to our boats after a very pleasant evening.

After a choppy night, and several jobs investigated, we headed back into town—a few items were needed to complete these little tasks and luckily all the shops were open now so retail therapy was undertaken. We had a lunch stop at the Queens Head which was really nice too before walking back and finishing the tasks in hand.

Denise with Roger not being any better, and after having a bad night headed back to Penton – shame but it was not to be this weekend for them.

Dinner at the Minnow had been booked and we were able to relax in the glorious sunshine in their garden area before sitting down to an excellent meal. Karen and Paul joined us by car at the end of the meal, fitting a kitchen had taken precedence over boating this weekend.  Considering they have not had a proper kitchen for nine months we understood this to be quite fair.  Further drinks and chatter were undertaken back on Proncois on our return to the boats and a very late night was had by some.

NOT too early Sunday morning I headed round the boats with cream eggs left for all by Denise and Easter eggs I had brought for all the boaters.  We left the moorings at 9.30 just as the heavens opened and with a crash of thunder and a dash or two of lightning we entered Shepperton Lock.  We had called up the lock office as the moorings were free for the 1st 24 hours and after some explaining managed to pay the £5 fee for the 2nd night – the lock was busy as it was the 3rdday (Marlow to Teddington leg) of the Devizes to Westminster Canoe race and was quite busy with people supporting the intrepid souls.

We continued up river being very lucky with the locks, either just emptied or nearly complete each time we approached, which was a bonus as the weather had not improved and we were very damp, and after Penton Lock time was moving on and a spot for lunch was being discussed.  We finally stopped at the Lammas moorings and walked to the Bells pub in Church Street glad to be in the dry and warm and a cracking roast lunch was much appreciated.  We walked back and had a quiet half hour to let lunch settle and then headed off again – on days like this the Lammas is such a peaceful spot.