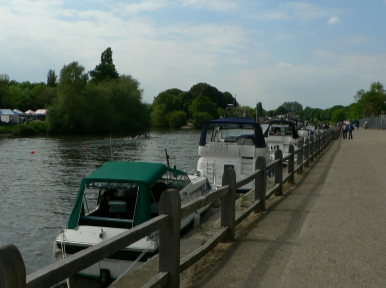 Four boats attended the event, Rosette II, Pieces of Eight, Prime Time and Chimerique and the weekend from Friday to Monday provided perfect boating weather.  The boaters that arrived on Friday enjoyed a pub meal in the evening.  All boats were in place by Saturday afternoon having completed the quiz that had been devised by Sue and Alan.  It started at Shepperton Lock and finished 45 questions later at Hampton Court.

The questions were fascinating and encouraged us to be perhaps more observant than normal.

Did you know that there is a bush in Molesey Lock that, thanks to clever topiary, is shaped to look like a face?  Locally, it is called George Bush!  The facial features may not be the same but some might speculate on the intellectual similarity! 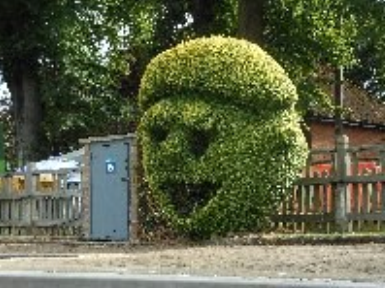 The river at Hampton Court was very busy due to a rowing regatta so we were entertained by racing during the afternoon.

On Saturday evening, we went to the Vecchia Roma restaurant where our numbers were swelled by June and David, Bob, Martin and Trish.

On Sunday morning we congregated on Rosette II for coffee and biscuits which were much appreciated.  Lynn then gave us a resume of her evening on the previous day when she had attended a hen party.  This was followed by the announcement of the quiz answers and the prize winners.  Julia and Jim were worthy and clear winners but only one point separated second and third.

Soon it was time to depart after another successful club event.

On the cruise back, there was a regatta and the sailing dinghies were all over the river so we moved over to the right bank.  One dinghy tacked almost under our bow and then, because he missed us the first time, immediately tacked again.  We swerved to avoid him and one of his colleagues shouted that we should have cut our engine.  We refrained from pointing out that without the engine we could not have manoeuvred away from the dinghy that could have ended up in two pieces on the bottom of the river.  On reflection, perhaps he had a good idea!