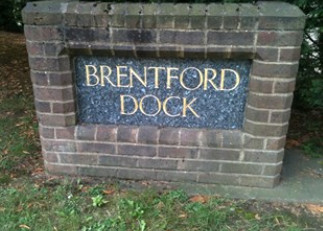 The crews of Proncois, Chimerique, Got It and Lady Weaver decided a few months ago that it would be quite nice to try a new venue on the tidal Thames this year after Roger saw an advert for Brentford Dock Marina.

The cruise as always was open to all club members though there were restrictions on the larger club boats entering the marina as they could only do so at high water on a spring tide to allow for free flow into the marina, thus the trip was planned allowing for this. As it turned out although initial interest was shown none of the club's larger boats joined the the cruise, but plans are plans and we cruised into the marina on free flow as per the passage plan.

After cruising about 50 minutes from leaving Teddington, Proncois made contact with Brentford Dock as we passed under the Richmond barrier and a very helpful dock master (Steve) made sure that he was visible from the bankside waving at us as the dock came into sight.  As soon as the water was slack all four boats entered the dock and were directed to our rather wobbly pontoons. 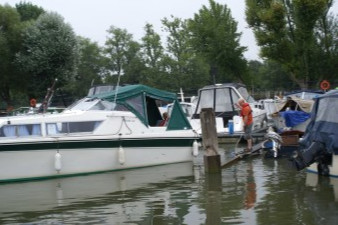 After we settled Steve came around to the boats and welcomed us all insisting on taking me off to the local tavern to introduce me to Brentford! Steve was very accommodating, as were all of the staff at the Brentford Dock. It seemed nothing was too much trouble as the charges were very reasonable.

On the Friday night we tried the recommended Indian restaurant, “Sam's Place” which was very basic with no alcohol on sale, althoughr you could bring your own with no corkage fee. Tthe food was excellent and the restaurant was very busy which made for a great atmosphere. We all walked back to our boats feeling very full and contented and settled down for a peaceful night.

Saturday Morning called for a quick planning meeting where it was decide that a visit to the nearby music museum would be something that everyone would like to do. We all left the dock at 10:00 to allow for the walk to the church where the museum was known to have been for years. We were very disappointed to find the church in a state of disrepair and currently being converted into a modern housing complex, However, aided by the power of Google Maps and a sign further up the street we soon located the new venue for the museum which was a purpose built lottery funded building.

The museum contains many organs from different periods in history, as well as a mighty Wurlitzer which came out of a pit below the floor. Paul was overjoyed to find out that this was the very organ he had seen at the Kingston cinema many years before (I didn't ask him if the films it accompanied back then were silent). We had a wonderful tour of the museum, which included a guide who demonstrated the many instruments to us. He was full of knowledge and still enjoying showing visitors the collection at 84 years young. Denise also got to demonstrate her playing skills during the tour as did Paul, though I do think there was an element of trickery going on! 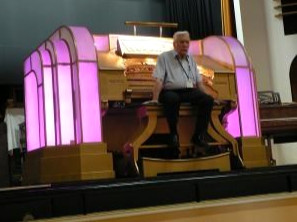 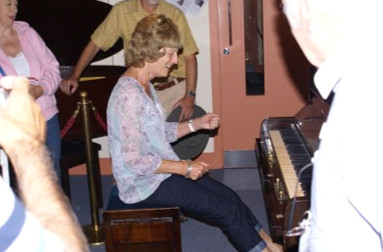 Saturday evening we all walked into town a five-minute walk or so and met up with Ann and Maurice before all going into the Italian restaurant, “La Rosetta”, where we all enjoyed a fabulous meal. We were especially pleased to be seated in front of the bifold doors which were open onto the patio area as it was an extremely hot night.

It was decided that we would pay a visit to Syon House the following day.

The following morning we all formed a walking party at 1000 hours and slow marched off to Syon House and gardens, having to stop at an exclusive chocolate shop on the way, which didn't open until 11 am. However, the shop assistant soon realized that it was unwise to stand between the Walton Bridge ladies and their chocolate and wisely opened up specially for them. Expensive chocolate purchased on we pressed to the House, where upon arrival June produced her Wyevale loyalty card which allowed her to get into the house with a buy one get one free discount. Not being one to miss out on a bargain Lisa dashed next door to the garden center and signed up as a loyal customer of theirs closely followed by Karen and Roger, (well owning a boat is an expensive business so you have to make the savings where you can). 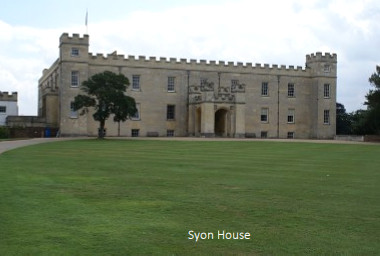 We all thoroughly enjoyed the visit to the big house and the grounds. I was amazed to learn that this was where Princess Victoria lived until she was 19years old.

The art works in the main house were outstanding and the guides in every room were full of knowledge. It truly is amazing the local history that is on our doorsteps, which we seldom visit. We have been to many historical sites over the years with the club and we have always enjoyed the day. The trip to Syon House was no exception.

The gardens and the tearoom, which served delicious cream teas was first class also.

In the late afternoon we enjoyed tea on Chimerique, which as time went on turned into the odd alcoholic drink or two (how surprising!!).

Time as usual went past quickly as is the case when in good company and before we all knew it the light was fading. Having had a long day Lisa and I along with Roger and Denise went off in search of takeaway pizza whilst everyone else retired back to their boats. Lisa and I sat on the back of Proncois enjoying a bottle of wine and pizza during the very late evening.

The following morning was spent at leisure as we didn't start to lock out of the dock until 14:45 hours when there was just over a metre of water outside. This allowed for a very gentle cruise back up river on the flood tide. The lock at Brentford Dock is quite small so we all had to lock out individually. we waited for Chimerique to lock out before making our way up river approaching the barrier at Richmond as the gates started to lift, perfect timing. By the time we had arrived at Teddington we were all together again and passed through Teddington Lock as a group. Chimerique and Lady Weaver stayed at Hampton Court for the night whilst Proncois and Got It pressed on to Penton Hook where the boats stayed for another week. 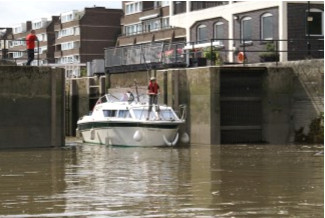 All in all we had a fabulous time and I am already thinking of a return trip in the very near future. A trip like this is not by any means daunting and puts no strain on the boats at all. Any of the boats in the club could make this trip easily, and we plan a return visit next year.