The darts competition in October this year shared the evening with the photographic competition. It was notably high tech, with the scoreboard no longer a blackboard and chalk affai.; Gone was the duster and the chalk, replaced with a brand new electronic scorer which did all the mathematics in double quick time—and no cheating either!

The Vice Commodore's team won a convincing victory over the Commodore's team. Well, convincing only because of a three dart bonanza delivered by Scilla just before the Commodore's team would have smashed through to claim victory. Having trailed all the way, the Vice Commodore's team had practically conceded victory to their opponents who were simply aiming for that last double, when Scilla on the trailing team was given the darts.
The score to finish was 34 when Scilla launched her first dart — double 8, leaving 18 to finish. The second dart landed on the board at double 6, leaving just 6 to score. Scilla took aim and launched her third dart — bang in the middle of triple 2! Howzat for a finish?

Those of us on the Commodore's team consoled ourselves that it must have been a fluke, but Scilla informed us all that she was playing to her normal standard, and it was nothing to be surprised at! Hmmm! Do we believe that?

So, off we went to find the highest scorer of the evening. Everyone had the choice of the lighter darts or the heavier missiles.

Each had their throw and at the end of the exercise, the winner was Sally who had notched up an impressive 83, beating David into second place with his high score of 75, with Peter coming in a creditable third with a score of 59. 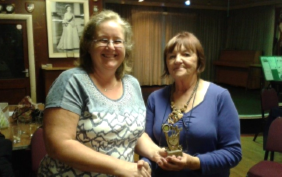 The picture shows Sally being presented with her winner's prize.