It was all drama on this trip. Penton Hook lock was being repaired over night on the Thursday evening, so we were hoping they would not run into any problems. The bottom bearing on one of the down stream gates has shattered, which required lifting the gate out of the water and welding to be done. By seven the next morning the EA website reported all was well.

We set off late Friday afternoon, planning to arrive at Citroen to grab moorings ready for the main arrival Saturday. Just as we were leaving the marina we got a call from Rosette telling us that the entire moorings were block booked by the Dunkirk Little ships, from mid day Friday to mid day Saturday. 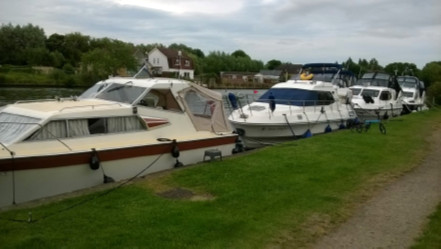 Plan B was quickly put into action.

We headed for the National Trust moorings just up stream from Citroen, by the time we got there, Rosette, Prime Time and Pastiche were already tied up. Unfortunately we had to pay £7 to moor overnight. We anticipated that the Little Ships would be moving off fairly early on the next morning, when we would make our move to grab the spaces.

Eight thirty next day, while most people were just stirring, the Little Ships went past in convoy. Swift action was required, we did a super quick start and got under way. We arrived at Citroen to find only two Little Ships remaining and loads of empty space. Calls went out to Miss Pud'n and Pieces of Eight to hurry them along.

The Bray contingent coming down-stream, had the misfortune to meet up with the Little Ships going up-stream. This caused some very slow passages through the locks. 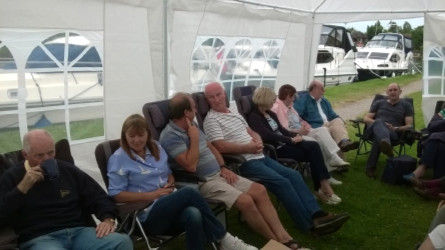 Chimerique arrived in time for the strawberries, cream and scones which were served shortly after two o/clock. Sparky's Dream and Got It arrived later, but we had saved some teas for them. Also arriving by car/foot were David & June and Dudley & Ann and Sylvia.

After the tea, orders for fish & chips were taken. They arrived bang on time at 7 o/clock, piping hot from The Big Fry (formerly Jack's) all very efficient, they even have a sign written delivery van. 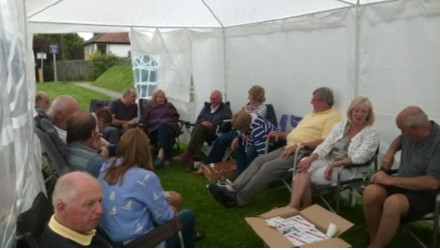 The evening passed quickly and the tent was packed up just before dark.

Sunday morning was used up by boys playing with toys. Tony and Barry were carrying out underwater inspection of bow thrusters and propellers using a water proof camera on a selfiestick. 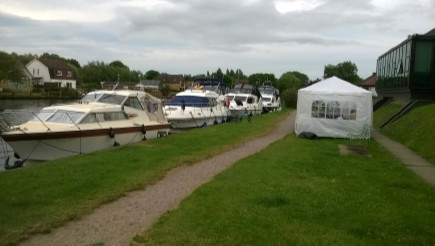 Sunday afternoon the Wimbledon final and the F1 at Silverstone were on the telly.