This year’s upriver cruise could not have been more enjoyable. Wall to wall sunshine, good company, and unlimited mooring for club boats. Messin’ about on the river does not get better than this. The cruise started at Windsor, but was soon joined by more boats at Hurley Lock. As we waited for club members to arrive, a boat was moored on the visitor moorings allocated to WBCC. Alan asked them if they would kindly move and the lady on board said she would ask her husband to move the boat forward as soon as he returned. Fortunately, this did not happen, because a few minutes later there was a crashing sound as the tree on the opposite bank fell across the narrow channel right on top of where the little boat would have moved to. 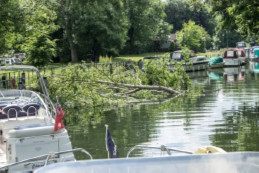 A BBQ that night set us up for a great week ahead, the next stop being Henley, where we were moored at Fawley Meadows right at the finish line of the ladies finals of Henley Royal Regatta. How lucky! It was so hot and sunny, we all chased the ever diminishing shadow as the sun tracked across the sky. Onlookers would have been forgiven if they thought we were playing a little known version of The wheels on the bus go round and round…. 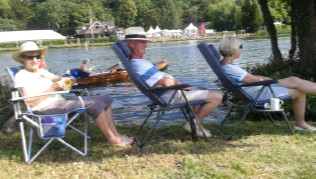 Onwards, upriver on another glorious day. As Roger put it, “The weather was fantastic. Each day Lynn would ask her app what weather was in store for the next day and every time it told us that it would be dry and hot. Either the app was remarkably accurate or it was stuck!

We all found moorings easily at Pangbourne, relatively close to each other, so the tent was erected and most people spent the day sheltering from the sun under it. Most, but not all.....Sita, who had become known to Alan as Furry Friend soon found the water and went in for a cooling swim. Soon, because she wanted to go for a swim repeatedly, she would become known as Soggy Doggie! After a lazy sojourn at Pangbourne, it was time to head back downriver, and the next stop on the schedule was Henley Town Moorings. Once again, fortune was with us and we all found moorings near to each other. We were joined by Miss Pud’n. The highlight at tea was presenting Barry with a birthday cake to cut! Later, some went off to Weatherspoon's while Tony persuaded a reluctant fuel pump to work again. It was the night of the Summer solstice and by coincidence the warmest night of the year. 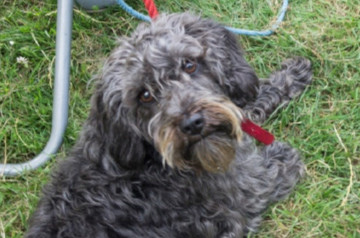 What better way to spend the evening than to sup a drink and watch the sun go down.

Early morning saw the club leave for Cookham. Hambledon Lock was full of WBCC cruisers making an early move. Out of the blue a cloud appeared and dropped a quantity of wet stuff on our heads without much warning. Lasting for about 10 minutes, this was the only rain we had throughout the cruise. Arriving at Cookham, we were also fortunate that most of us were able to moor on the Town moorings. Some of us attempted to put up the tent. After several futile attempts, we called on Phil to supervise, and tent and BBQ went up in double quick time.

As it turned out, the evening was a warm, pleasant and balmy one, and no one wanted to go into the tent to eat. So Al Fresco it was and a the tent remained empty until we all retired to our boats. 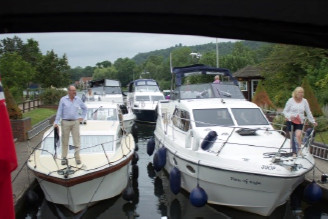 The cruise was now drawing to a close and the next stop was Bray Marina, with a BBQ and sail past scheduled.

Naturally, all the WBCC craft were spruced up and dressed for the sail past taken by Commodore David Seager and his wife June. Witnessed by a number of bystanders on the front at the marina, WBCC boats made an impressive sight as they exited the marina in an orderly fashion, cruised downstream past the Oakley Arms and then upstream, past the Commodore and into the marina. 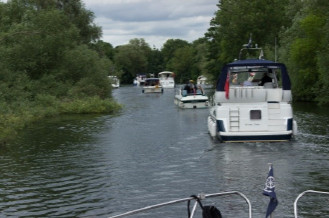 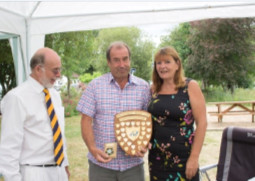 This was a fitting closing ceremony for the upriver cruise, a celebratory tea, complete with cake and BBQ followed. Miss Pud’n was awarded the Concurs de Elegance prize 2016 and the shield presented to Barry at the tea.

A perfect summary of the week was provided by Tony Cliffe. He says:

The weather! The weather! I say it twice as we had such incredibly hot weather for the upriver week away. Pastiche did the whole trip starting at Windsor but an early sign of the  effects of the hot temperatures happened to us at Henley. With the fridge trying valiantly to keep things cool for us it was on almost constantly, so much that it flattened our domestic batteries. The first we knew of this was when we got up the next morning and found that the new electric loo would not flush, no need for further comment. Suffice to say that normal service was resumed after we linked batteries and started the engine, but we did have a few moments of near panic.

The whole trip to us was what boating is all about, great weather, not many queues at the locks, perfect moorings and relaxing and socialising around the BBQ with all the other masterchefs.

Our only real problem came as we were entering Marsh lock on the return leg when the starboard engine gave out. Not too much or a problem crabbing out of the lock especially as we only had to reach Henley town moorings where most of the club boats had already tied up so we were given plenty of help to come alongside and moor. We li?ed the engine hatch to allow both the engines to cool while we took a stroll into the town and when we returned I decided to find out what was wrong. With help from Barry, Phil and Neville the problem was traced to a faulty fuel pump, naturally it failed on the engine that was charging the batteries and providing hot water, so I swapped the good pump over to that engine. In the meantime Phil and Barry took the faulty pump away and traced the problem to a faulty electrical contact so I reinstalled it and hey presto! 2 working engines.

Out of interest it was 33 deg making it the hottest day of the year whilst the temp in the engine compartment was 48 deg. After spending 2 hours down there I could not have been wetter if I had been dunked in the river. Also worthy of note is the  quote given to me by DB Marine to supply me with a replacement pump (as we were going to Cookham the next day) of almost £400 including next day delivery from Belgium, this against a price Phil found on ebay of £64 for the same thing. My special thanks to Barry for noticing I was more than a bit hot and passing down to me the best can of cold lager I have EVER tasted.

Denise added another story. She said:

We were the last to leave Fawley Meadow at Henley on our way upriver, and I was just giving a crust of bread to a couple of swans when a Swan Rescue boat pulled in just behind us and two ladies got out. Was  I in for a scolding? No, she too was feeding a crust and calling all the other swans over. She explained that they had to collect all the swans because the boats in the Henley Regatta could hit and kill them.

They were joined by five other boats and they corralled them in, just as the Swan Uppers do, put bags over their bodies to stop flapping wings, and put them into the boats. Funny to see a lady marching along with a swan under her arm with just its head and neck sticking out. We left them to it – fancy that!

The Chinese meal in Windsor on Friday was excellent. It was a last minute decision to eat in Windsor and David and June were able to join us as well and travelled with Roger and Denise in Chimereque and taxi back to Bray marina a?er the meal. The meal was All You Can Eat which is a great way to sample Chinese food as I get very confused by the vast choices on the menu.

We left Windsor early on Saturday so I was able to meet Lisa to go shopping together for the evenings BBQ.

The sailpast was a spectacle with 9 boats all decorated with flags . The weather stayed dry even though some angry clouds were about. Afternoon tea followed the sailpast and Debbie and Detlef arrived with a gorgeous homemade cake.

Jim and I had a really lovely few days cruise with friends. The weather made it extra special and the heavy rain at times didn’t spoil a thing.

P.S Everyone will join me in saying a big thank you to Julia and Lisa for the grub, Debbie for the celebration cake and Phil for leading a splendid cruise, for organising the BBQs, and providing specialist expertise (which no one else seemed to have), in erecting the tent.