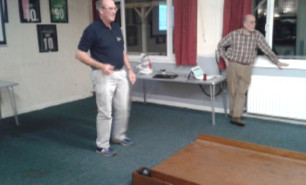 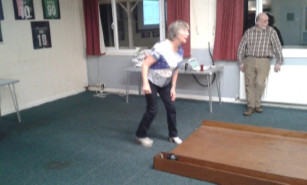 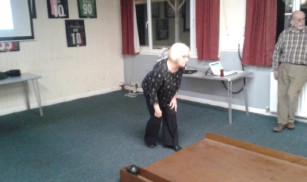 Another year, another competition, another closely fought battle ….That is the story of the WBCC skittles competition held at the Sunbury Sports Association in the latter part of 2017 (sounds so long ago!)

As usual, the Commodore’s team did battle with the Vice Commodore's chosen players. Round one started with a light headed ‘get your eye in’ round and finished with the two teams just one point apart, with the vice commodore just ahead. The second round improved on this performance, illustrating with some certainty (but no guarantee) which was the better team.

And so it continued, each round being a closely fought battle of skill, concentration, heckling and strength.

Supper was a well prepared and tasty affair right in the middle of the competition. The break allowed members to gloat about high scores or simply hide if scores were not high enough, but most importantly allowed the players to resuscitate in time for the second half.

Of course, the electronic score board and laptop computer (both of which replaced our ultra reliable John Cleaver) did not lie and could not be bribed, and by the end of the competition, the scores showed the V-C’s team as slightly ahead.

Tony Cliffe won the award for the most points scored by an individual, no doubt as a result of the multiple 10s he scored! Well Done, Tony.

It was particularly good to see Ron Pusey looking so well at the evening, having had good news from his medical team that the treatment had been successful.

Thank you to Jim and Julia for making all the arrangements for this splendid evening.