The Ten Pin Bowling evening we had last week was a great success. Meeting at Tolworth bowling alley late on Saturday afternoon, 12 members were met with the cacophony of noise that can only be created by hundreds of excited young children trying to lob a 10 pound ball (weight that is) at a set of defenceless pins some 60 feet away. We did actually see a ball on the lane next to us that was bowled so slowly it stopped as it reached the pins which caused immense amusement to the 36 under tens on that lane, accompanied by the expected running/jumping/hopping/screaming from all of them, as is usually associated with such events!

No matter, eight of us split into two teams and we bowled two games each with honours more or less even. We had a bit of a surprise when at 6pm sharp the lights over the lanes were turned off leaving only the target pins illuminated, see picture below to show the effect.  Special mention must be made of Jim who managed to pick up a 5-10 split. (“split” noun : If after the first ball has been bowled, 2 or more pins are left where the gap between them is wider than the ball)

Afterwards we went down Tolworth Broadway to have dinner at the Restaurante Sorrento where many of us enjoyed a substantial three course meal from the set menu for just under £20. After the main course it was interesting to hear people saying that they were “stuffed” and had no room for a pudding. Ha! That was before they set eyes on the sweets trolley, and nobody wanted to be left out. 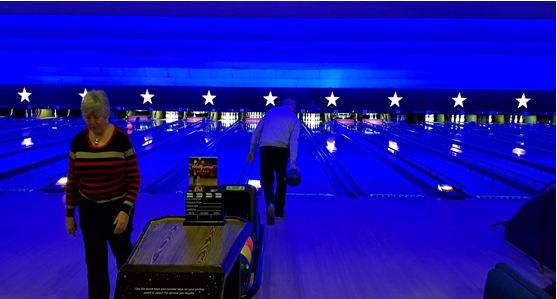 Bowling in semi darkness after the lane lights were turned off, presumably to add atmosphere!